“Fear Not For Man” sounds like a work in progress interrupted by the February 1977 attack, to which Fela’s two vocal choruses may or may not have been added after the event. After citing Kwame Nkrumah’s motto “the secret of life is to have no fear,” Fela continues: “I be man, I be man, I am a man, I am a man, run run run, I na go run, goat dey run, yes, na man dey stand, yes” (I am a man, I don’t run away, goats run away, men stand and fight). It is a heavy lyric, but Fela could have been moved to write it anytime since the1974 attacks on Kalakuta, not necessarily after February 18 1977. The brevity of the lyric and the sound of the vocal suggest that Fela had intended to come back later and record an extended lyric, before being overtaken by events. Originally released by Decca Afrodisia.

Green vinyl is limited to 300 copies. 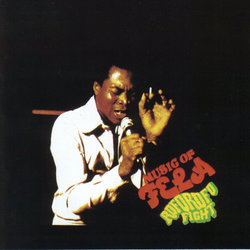