Given the scale of Fela’s recorded legacy – a total of more than 50 albums worldwide, not counting reissues and compilations – it includes surprisingly few collaborations. There are three reasons for this. The first is that Fela chose to live in Nigeria all his life, despite the relentless harassments, beatings and jailings he received from the army and police from the mid 1970s right up until a few weeks before his passing in 1997. He felt most comfortable recording in Lagos and travelled abroad only to tour. Consequently, collaborations were limited to those with musicians who visited Nigeria, and it was not until the new millennium that the country became a regular destination on the international touring circuit.

The second reason is simply that Fela was choosy about who he worked with. He was not interested in recording with visiting stars simply to boost his profile or their egos, nor would he work with artists who valued African music only as an exotic accessory (and Fela’s bullshit filter was finely tuned).

The final reason is that Fela knew precisely how he wanted his music to sound. He had no wish to accommodate other aesthetics. This is why he almost always produced his own albums. He worked willingly with outside producers on only four occasions: with EMI producer Jeff Jarrett on Afrodisiac (1973), Ginger Baker on He Miss Road (1975), British dub pioneer Dennis Bovell on Live In Amsterdam: Music Is The Weapon (1984), and Compass Point All Stars’ keyboards player Wally Badarou on Teacher Don’t Teach Me Nonsense. All four were empathetic collaborators and the albums they produced are top dollar. A fifth album, Army Arrangement (1985) was disastrously post-produced by New York avant-rock bassist Bill Laswell while Fela was jailed on trumped-up currency smuggling charges (Fela later said that listening to it was “worse than being in prison.”)

All this means the number of collaborations to be found in Fela’s catalogue is tiny. It also means the quality is uniformly high. 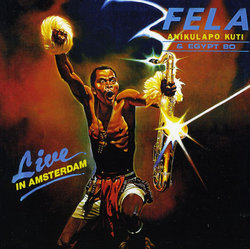 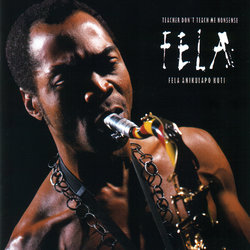 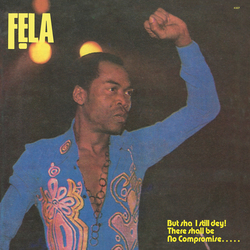 The American jazz trumpeter Lester Bowie was wholly on Fela’s musical and extra-musical wavelength. Bowie was a co-founder of both the influential Black Artists Group and the Art Ensemble of Chicago, and in sync with Fela on black rights and human rights in general. Over the years, various racists attempted to abuse him, but as a combat-hardened ex-marine, Bowie stood up for himself.

Bowie made an extended visit to Lagos during late 1976 and early 1977 and he and Fela became friends. Bowie joined the horn section on four Afrika 70 albums – Stalemate, No Agreement, Sorrow Tears And Blood and Fear Not For Man. Afrika 70’s Tunde Williams took almost all the trumpet solos, but Bowie can be heard to great effect on “Dog Eat Dog,” an instrumental on No Agreement; his solo is in the style of post-Bitches Brew electric-era Miles Davis. The Art Ensemble included a version of Fela’s “Zombie” on its 1987 album, Ancient To The Future, and Bowie sometimes guested with Egypt 80 when the band toured the US. 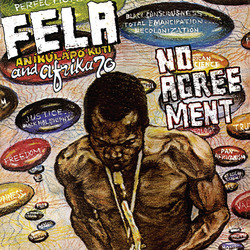 Another studio guest was Sandra Izsadore, the American woman who became Fela’s girlfriend during his May 1969 – March 1970 tour of the US with Koola Lobitos / Nigeria 70. If Lester Bowie shared many of Fela’s social views, Izsadore actually shaped them; she was one of two women who were the primary influences on Fela’s political education (the other being his mother, Funmilayo Anikulapo-Kuti, a hero of Nigeria’s struggle for independence from Britain). During the US tour, Izsadore introduced Fela to the writings of Malcolm X, Angela Davis, Stokely Carmichael, Frantz Fanon and other revolutionary thinkers.

Izsadore visited Fela in Nigeria several times. During a 1972 visit, she sang back-up vocals on Stratavarious, an Afrorock album featuring Fela on keyboards, which was made by Fela’s friend Ginger Baker, who was then living in Lagos. In 1976, she took lead vocals on the title track of Fela’s album Upside Down.

Fela’s willingness to record with Bowie and Izsadore was partly the result of shared political commitment. His collaborations with GINGER BAKER, however, were driven purely by music, where they had deep affinity. Fela met Baker in London in the early 1960s, while he was studying trumpet at Trinity College of Music by day, and by night hanging out in Soho jazz clubs, where Baker was already gaining a reputation. One night at the Flamingo Club in Wardour Street, Fela asked Baker if he could sit in with the band. Baker said yes and was impressed by what he heard. The two became friends and frequently played together. Fela and Baker temporarily lost touch after Fela returned to Lagos in 1963, but they renewed their friendship when Fela and Africa 70 (as Afrika 70 was then called) visited London in 1971. Baker – by this time a major star on the international rock scene - played alongside Africa 70 drummer Tony Allen on two albums Fela recorded in London during the visit: Live! With Ginger Baker and Why Black Man Dey Suffer.

Later in 1971, Baker relocated to Lagos, where he built the state-of-the-art Batakota Studio, in which many of Fela's albums of the era were recorded. He remained based in the city until 1975, and spent much of his time hanging out with Fela. He also regularly sat in with Africa 70 at the Shrine, and deputised for Allen on tour on a few occasions when Allen was ill. Baker remembered those up-country gigs fondly. “It was incredible,” he said. “The people used to come and put money on my head. It was a sign of approval. They just couldn’t believe it. Oyinbo [white man] drummer!”

In 1974, Baker produced Fela’s album He Miss Road, adding an attractive dusting of psychedelic effects to the horn section and Fela’s keyboard, and making sure Tony Allen’s drums were sympathetically miked. In 2012, Baker was invited by Knitting Factory Records to curate Fela: Vinyl Box Set 2.

Fela’s relationship with Tony Allen, who joined the Fela Ransome-Kuti Quintet in 1964, was one of permanent collaboration, for though Afrobeat was overwhelmingly Fela’s creation, Allen’s drum-patterns were signature ingredients. Allen was the anchorman of all Fela’s bands for fourteen years, as the Quintet morphed first into Koola Lobitos, then Nigeria 70, then Africa 70, and finally Afrika 70. Along with most of Fela’s musicians, he left Afrika 70 in 1978, triggering the formation of Egypt 80.

Fela acknowledged Allen’s contribution to his music by producing and playing on three albums on which Allen fronted Africa 70 / Afrika 70: Jealousy (1975), Progress (1977) and No Accommodation For Lagos (recorded 1978, released 1979).

Various reasons have been put forward for Allen’s departure from Afrika 70, including disputes over money and disenchantment with the increasing politicisation of Fela’s music. But in 2008, Allen said, “It was no big thing. I was just tired. Fela was right about everything and everything he sang about is still happening. Playing with him was like being at university and you don’t run away from education. I just needed a break.” For his part, Fela later said that Allen played “like four drummers.”

Certainly, Allen and Fela remained on good enough terms for Allen to guest on “Africa Centre Of The World” on the album Music Of Many Colours, which Fela recorded with Roy Ayers in 1979 (see below). Allen then formed his own band and in 1984 left Lagos for London, before moving to Paris in 1985. “Lagos was too small for me and Fela,” said Allen. “I wanted room to take off without causing competition.”

Fela produced and played on two other albums on which key band members fronted Afrika 70: Mr Big Mouth by trumpeter Tunde Williams, released in 1977, and Low Profile (Not For The Blacks) by baritone saxophonist Lekan Animashaun, recorded in 1979 but not released until 1995. Animashaun joined the Fela Ransome-Kuti Quintet in 1965 and like Tony Allen was a founder member of Koola Lobitos later that year. He took over from Allen as bandleader of Afrika 70 when Allen left in 1978. He continued in the role when Fela formed Egypt 80 and when Fela’s son Seun took over Egypt 80 following Fela’s passing. Williams joined Koola Lobitos in 1967 and was a key member of Nigeria 70, Africa 70 and Afrika 70 until he left Fela in 1978.