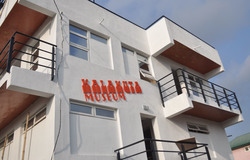 The Kalakuta Museum in Ikeja, Lagos derives much of its authenticity from being located in the actual three-storey house where Fela lived in Kalakuta Republic, the fabled compound which, in defiance of Nigeria’s military dictatorship, he declared was an independent, self-governing state. Fela lived there with his family and Egypt 80 until his passing in 1997 and the Museum is packed with his personal belongings and artefacts relating to his life and career.

The name Kalakuta Republic derived from a spell Fela spent in prison in 1974 on suspicion of possessing weed. He was held in a communal cell which his fellow prisoners jokingly called Kalakuta Republic - in Swahili, kalakuta means “rascal.” The tag had a ring to it which appealed to Fela.

Kalakuta Republic was first situated in the Lagos suburb of Surulere, where Fela, his family and Afrika 70 lived until 1977, when the army burnt it to the ground. On February 18, some 1,000 soldiers sealed off the neighbourhood and broke down Kalakuta’s defensive perimeter fence. Residents were beaten with rifle butts and iron bars. Women were raped. Fela was beaten with particular viciousness and his 77 year old mother, a hero of Nigeria’s independence struggle, was thrown from an upstairs window, fracturing a leg (she died the following year from the trauma she had suffered).

The soldiers set fire to the central building and prevented the fire brigade from reaching the scene. The blaze gutted Kalakuta, destroying all Fela’s master tapes, six Afrika 70 vehicles, a recording studio and the free medical-clinic run by his brother, Dr Beko Kuti, who was also severely beaten.

The scale and brutality of the attack would have frightened most people into submission. But not Fela. Whatever successive military regimes threw at him, he refused to be silenced. Once he had regrouped, he rebuilt Kalakuta Republic in Ikeja.

Following Fela’s passing, Kalakuta began to fall into disrepair. But in 2010, the architect Theo Lawson – whose acclaimed Freedom Park, celebrating 50 years of Nigerian independence, had just been opened on Lagos Island - began working with Fela’s eldest daughter, Yeni, on plans for the Kalakuta Museum. Substantial funds were needed to realise the project and the Kuti family had already put much of their inheritance into building the New Afrika Shrine. So in 2011, Yeni and Theo approached the Governor of Lagos State, Babatunde Fashola, asking for his help in attracting sponsors. It was a long shot – during Fela’s lifetime any form of government endorsement would have been unthinkable – but to Yeni and Theo’s astonishment, Fashola not only welcomed their plans but authorised a $250,000 start-up grant.

Though unfinished, the Kalakuta Museum was officially opened in 2012, on October 15, Fela’s birthday. In 2017, the new State Governor, Akinwunmi Ambode, authorised funds to finish the project.

The Kalakuta Museum is managed by Fela’s son Kunle. Fela’s tomb is next to the house. Inside, the Museum hums with people and positivity. The walls are covered in historic photographs, posters, paintings, murals, album covers and newspaper cuttings. Some of Fela’s musical instruments are on show, including his brightly painted, signature tenor saxophone. It is possible to look into Fela’s bedroom, which is preserved as he left it – and still contains the refrigerator for his ice-cream, his snack of choice during an attack of the munchies. Rows of Fela’s shoes and shirts are on display along with stage suits, the fur coat he took on tours of Europe and the US, and even a few pairs of Speedo underpants, his preferred leisurewear. There is a rooftop café and visitors can stay the night in one of several air-conditioned, en-suite rooms. 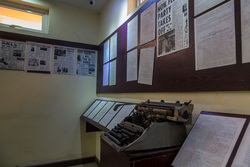 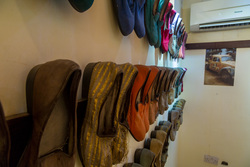 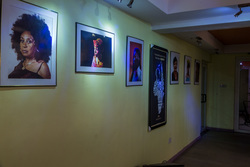 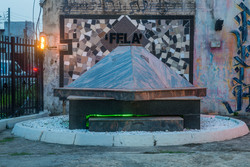 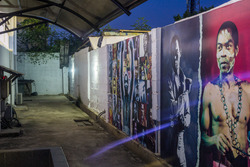 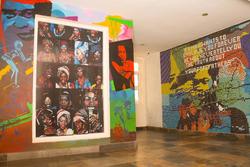 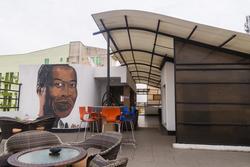 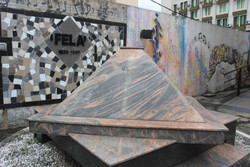 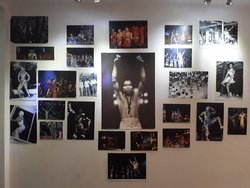 All that is needed for a fully immersive experience is for the army to burst in and break a few heads. But, happily, those days are gone. No longer regarded as a complete pariah by the authorities – though not yet fully clasped to their bosom either – Fela is finally beginning to be officially recognised for the huge contribution he made to the emancipation of post-colonial Nigeria. (And not only at the Kalakuta Museum. In 2017, public funds were authorised to turn the house in Abeokuta where Fela grew up into a visitor attraction).

The Kuti family’s ongoing campaign for the development of Nigeria is not, however, going to be bought off by government handouts, any more than Fela was silenced by government violence. In speeches at the Museum’s opening ceremony, Yeni and her brother Femi commended Governor Fashola for helping to preserve Fela’s legacy, but stressed Nigeria’s continuing need for the civic infrastructure, schools, housing and hospitals that their father fought for - and also for the need to double-down in the fight against government corruption, which continues to have a profoundly corrosive effect on the country. Opening the Kalakuta Museum was just step one, said Yeni. Step two had to follow.

So, for the moment, the Kalakuta Museum stands in part as an affirmation of Fela’s life and work - and in part as a reminder that much more still needs to be done.

Work began on converting the house in 2011 and although not quite finished, the Kalakuta Museum was opened to the public the following year, with an opening ceremony on October 15 2012, attended by Governor Babatunde Fashola. In 2017 the new Governor of Lagos State, Akinwunmi Ambode, provided additional funding to complete Theo and the family’s vision, and to acquire the adjacent property which serves as a car park and also houses rehearsal facilities which are used by Seun Kuti and Egypt 80, as well as staff quarters. Fela’s son, Kunle, now runs the Museum and, once again, it has become a vibrant and popular destination for local Fela aficionados, and for visitors from around the world who come to pay homage. Not only are they able to soak up the enduring, authentic atmosphere, look into Fela’s bedroom through the glass that has replaced an entire wall and see his books, clothes and musical instruments, wander around the many rooms lined with photographs, framed documents and video screens, but also, should they wish for a deeper experience, even stay for a few days. Kalakuta has become a hotel with a number of well appointed, air conditioned bedrooms, each with its own bathroom, available at extremely reasonable rates.

And there’s an elevator! This is thanks to Fela’s insistence while designing the house that an elevator be installed. “Ahh Fela” his advisors proclaimed, “there’s no budget for an elevator.” But Fela had the foresight to insist that an elevator shaft, at least, be included. Now, 35 years later, thanks to Governor Ambode’s cash injection, the elevator has finally been installed. It takes you up to the rooftop café.

On the roof, Fela’s son, Kunle has created a homely, comfortable multi- purpose environment, which can also be reached by an outside staircase. Hotel guests can enjoy breakfast, lunch and dinner, while visitors are welcome to take coffee or a beer while looking out over the Ikeja skyline. There are regular, well attended events, such as karaoke evenings and silent disco nights where each participant is given multi- channel headphones. In July this year I even had my 77th birthday party there to which I’d invited all of my Lagos besties, animated by a 12 piece Afrobeat band led by Showboy, Fela’s former baritone saxophonist.

What would Fela have thought about the way in which his former home has evolved? Well, from the basement to the rooftop the building is so imbued with Fela’s spirit that, sitting in the rooftop café I almost expect him to appear. He would, I’m quite sure, be exceedingly proud, as would my partner Francis, also sadly no longer with us, of what has been so ably achieved in breathing life back into this splendid, historically relevant, building.