Impressed by the Quintet recordings, NBC hires Fela as a junior producer, with special responsibility for music programming. He forms a second edition of the Fela Ransome-Kuti Quintet, this time focusing on straightahead jazz rather than highlife. Drummer Tony Allen (later a key member of Afrika 70) joins the group. A single is released: “Great Kids” / “Amaechi’s Blues.” The record label describes the A-side as “highlife” and the flip side as “modern jazz.” 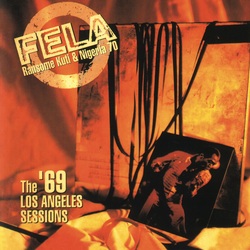