Olufela Olusegun Oludoton Ransome-Kuti – Fela - is born on 15 October in Abeokuta, a town fifty miles north of Lagos. His family is relatively prosperous and it is among the few in Abeokuta with a car (Fela’s mother, Olufunmilayo Ransome-Kuti, a pioneering feminist, is one of the first Nigerian women to drive one). Fela’s father, the Reverend Israel Ransome-Kuti, is the Principal of Abeokuta Grammar School. Fela’s first cousin, Wole Soyinka, later a Nobel Prize-winning writer, sometimes spends his school holidays at the Ransome-Kuti home. Fela would later attribute many of his political ideas to his mother. He would also cite Nkrumah’s dictum, “The secret of life is to have no fear” – a belief he lived by throughout his life, whatever the consequences. 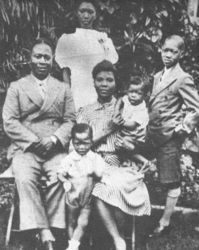 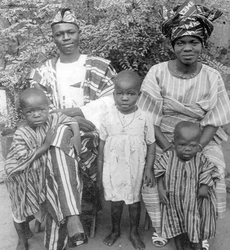 Both Fela’s parents actively oppose British colonial rule. On one occasion, his father is slashed on the face with a soldier’s bayonet for refusing to remove his hat while walking past the British flag flying at the local army barracks. During the 1940s, Fela’s mother had become close friends with Kwame Nkrumah, the inaugural president of Ghana. In 1960, Ghana became the first black state in Africa to free itself from British rule. Fela’s mother and father were loving parents but they were also strict disciplinarians who beat Fela frequently when he was a child.

Fela’s paternal grandfather, the Reverend Josiah J. Canon Ransome-Kuti, was the first Ransome-Kuti to have a record released. In 1925, aged 70, he travelled to London, where he recorded some hymns sung in Yoruba for the Zonophone label.