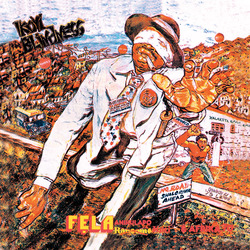 Kalakuta Show
Fela tells the story of the first large-scale police attack on Kalakuta Republic, on 23 November 1974. Following the drug squad raids in the spring that year (documented on the earlier albums Alagbon Close and Expensive Shit), Fela had erected a ten foot high barbed wire fence around the compound and stationed guards at the gate. “There had been so many raids,” he said years later. “You can’t count how many times they beat my people, in my house, on the street.” The defences were insufficient to repel a force of around 70 police armed with tear gas, machetes, wire cutters and axes. On the pretext of searching for a young woman who it was falsely (and quite ludicrously) alleged Fela had abducted, they stormed the compound. After throwing gas canisters into the buildings, forcing the occupants to exit, they set about anyone they could catch, beating men and women alike. Originally released by Kalakuta.

Ikoyi Blindness
Fela returns to the previous album’s focus on Mushin, this time specifically contrasting the neighbourhood to its richer counterpart, Ikoyi. Ghariokwu Lemi’s front-cover portrait of a blindfolded Ikoyi man (blind to social injustice) is complemented by a rear-cover strip cartoon showing a young Mushin resident standing up to a uniformed abuser and demanding lawful treatment. The narrative is continued on “Gba Mi Leti Ki N’Dolowo (Slap Me Make I Get Money).” In Lagos, there had been a recent upsurge in the police and army assaulting people in the street and then shaking them down for money – and they were getting away with it. Fela demands that the courts uphold the law equally for rich and poor, for uniformed servants of the state and ordinary citizens. Originally released by Africa Music.