Fela and Egypt 80 resume international touring. Over the next three years, they will tour widely in Europe and the US. In July, Fela and the band give two performances at the Apollo Theatre in Harlem in support of James Brown, who is serving a two-year prison sentence on charges including the assault of a police officer (one of those “he struck my baton with his head” assaults). 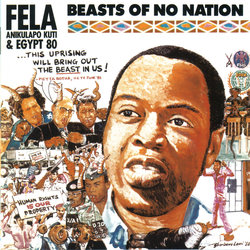 The masterpiece Beasts Of No Nation is released, on which Fela takes to task such enemies of independent black Africa as British Prime Minister Margaret Thatcher, US President Ronald Reagan and South African President P.W. Botha. The album title is taken from a speech by Botha in which he said, “This uprising will bring out the beast in us.”